U.S. stocks inched up on Tuesday to all-time highs after the opening bell, highlighted by the S&P 500 conquering the 1900 threshold for the first time on record a day after benchmark indexes finished at record highs. 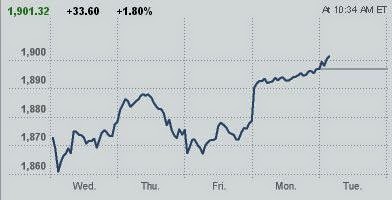 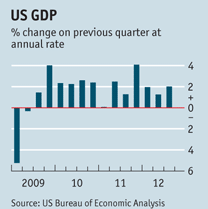 America’s economy rose at a 2% annual pace in the third quarter, reported the Bureau of Economic Analysis this on October 26. It marks an acceleration from a second quarter in which growth clocked in at just 1.3%.

The acceleration itself is encouraging. So too are some of the sources of that acceleration. Consumers continue to pull their weight, and an 8.5% rate of growth of durable goods consumption in the third quarter suggests that the appetite for big purchases is holding up. Residential investment boomed, rising at a 14.4% annual pace for the quarter. Despite that the sector managed just a 0.33 percentage-point contribution to total growth. The relatively low contribution reflects just how far residential output tumbled during the recession and recovery. Construction should chip in ever more in coming quarters, however, as inventory levels have been plummeting and rents and prices rising.

Government spending and investment also helped output along in the third quarter. The biggest contribution came from a rise in federal defense outlays.

There is also some cause for concern in the report, however, which seems to reflect the slowdown in industrial activity related to global economic weakness. The contribution of investment to growth sank for a second consecutive quarter, and net trade was a drag on output as exports fell by more than imports. Where industrial recovery and trade helped compensate for domestic economic weakness early in the recovery, they now seem to be preventing domestic resilience from adding more to output.

There is good reason to expect continued acceleration into the fourth quarter. A recovering housing sector should continue to raise household confidence. But beyond that, the outlook grows more cloudy. A raft of spending cuts and tax rises—the fiscal cliff—looms at year's end. If Congress is unable to prevent some of the expiring measures from hitting, the fiscal blow could harm two of the sectors most responsible for this quarter's decent performance: personal consumption and government spending and investment.

The Federal Reserve on Thursday announced that it is launching a new program of open-ended bond purchases, so-called QE3, saying it will buy $40 billion of agency mortgage-backed securities each month as long as the economy needs it, starting Friday.

It's also keeping in place so-called Operation Twist, which consists of swapping short-dated securities for longer-term securities, as well as reinvesting the proceeds of maturing securities, so the central bank will be adding $85 billion of long-term securities each month through the end of the year.

The Fed is also extending its plan to keep interest rates exceptionally low until at least through mid-2015. Fed funds rates are currently targeted at a rate between 0% and 0.25%.

U.S. stocks added to Thursday gains after the Federal Open Market Committee announced a new round of buying mortgage-backed securities.

The latest government statistics showed that the United States economy expanded by a simply 1.5 percent annual rate in the second quarter. It has lost the momentum it appeared to be building earlier this year. The government also provided on Friday a revised figure for first-quarter G.D.P., saying the economy then grew by a 2 percent annual rate. The previous estimate was 1.9 percent.

The economic growth, as measured by the gross domestic product, lagged as consumers curbed new spending and businesses held back. Consumers increased their savings rate, a sign of increased uncertainty about the future. Several bright spots in the first three months of the year, including auto production, computer sales and large purchases like appliances and televisions, dimmed or faded away altogether in the second quarter, and government at all levels continued to cut spending. Growth was not strong enough to drive down the unemployment rate, which has stalled above 8 percent in recent months.

Exports accelerated in the second quarter despite more recent signs of diminishing demand, but the gain was canceled out by a larger increase in imports, which count against the gross domestic product. Economists expect exports to shrink as the dollar rises against other currencies, making American goods less competitive.

The housing sector, which has gone from a drag on the economy to a positive, continued to grow, posting a 9.7 percent gain, though it is less than half its rate of growth in the first quarter.

Inflation, a measure watched closely by the Federal Reserve as it determines whether to take further action, slowed as well, with consumer prices growing only 0.7 percent compared with 2.5 percent in the first quarter.

The agency now estimates average annual growth of 0.3 percent over the three-year period, rather than 0.4 percent.

LIBOR (the London inter-bank offered rate) scandal that involves Barclays, a 300-year-old British bank, is beginning to assume global significance. Over the past weeks damning evidence has emerged, in documents detailing a settlement between Barclays and regulators in America and Britain that employees at the bank and at several other unnamed banks tried to rig the number time and again over a period of at least five years. And worse is likely to emerge. Investigations by regulators in several countries, including Canada, America, Japan, the EU, Switzerland and Britain, are looking into allegations that LIBOR and similar rates were rigged by large numbers of banks.

The LIBOR that the traders were toying with determines the prices that people and corporations around the world pay for loans or receive for their savings. It is used as a benchmark to set payments on about $800 trillion-worth of financial instruments, ranging from complex interest-rate derivatives to simple mortgages. The number determines the global flow of billions of dollars each year. Yet it turns out to have been flawed. 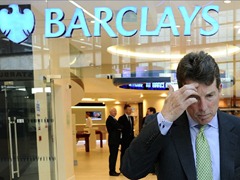 On July 3rd, Barclays PLC Chief Executive Robert Diamond caved in to intense pressure to quit after the U.K. bank became embroiled in a bitter political row over its role in the Libor rate-rigging scandal. Robert Diamond resigned amid a deepening dispute about whether the Bank of England pushed the lender to submit artificially low Libor rates during the financial crisis.

Like many of the City’s ways, LIBOR is something of an anachronism, a throwback to a time when many bankers within the Square Mile knew one another and when trust was more important than contract. For LIBOR, a borrowing rate is set daily by a panel of banks for ten currencies and for 15 maturities. The most important of these, three-month dollar LIBOR, is supposed to indicate what a bank would pay to borrow dollars for three months from other banks at 11am on the day it is set. The dollar rate is fixed each day by taking estimates from a panel, currently comprising 18 banks, of what they think they would have to pay to borrow if they needed money. The top four and bottom four estimates are then discarded, and LIBOR is the average of those left. The submissions of all the participants are published, along with each day’s LIBOR fix.

In theory, LIBOR is supposed to be a pretty honest number because it is assumed, for a start, that banks play by the rules and give truthful estimates. The market is also sufficiently small that most banks are presumed to know what the others are doing. In reality, the system is rotten.

First, it is based on banks’ estimates, rather than the actual prices at which banks have lent to or borrowed from one another.

A second problem is that those involved in setting the rates have often had every incentive to lie, since their banks stood to profit or lose money depending on the level at which LIBOR was set each day. Worse still, transparency in the mechanism of setting rates may well have exacerbated the tendency to lie, rather than suppressed it. Banks that were weak would not have wanted to signal that fact widely in markets by submitting honest estimates of the high price they would have to pay to borrow, if they could borrow at all. Read full article “LIBOR Rigging” at smartinmoney.com

The Federal Reserve on June 20th it announced its seventh installment of unconventional monetary policy since running out of orthodox ammunition in late 2008, when short-term interest rates fell, in effect, to zero. It would purchase $267 billion of long-term bonds by the end of the year, paid for from the proceeds of sales of short-term bonds already in its portfolio.

The move extends a program, called Operation Twist (because it "twists" the slope of the yield curve on bonds) . To lower long-term interest rates down in the hope of stimulating demand, the Fed announced Operation Twist program last autumn and due to expire this month, under which the Fed has swapped $400 billion of short-term bonds for long-term ones. Previous initiatives have included purchasing bonds with newly created money (“quantitative easing”, or QE), reinvesting the proceeds of maturing bonds, and verbally committing to keeping rates near zero for ever longer periods.

This latest round of monetary easing, like its predecessors,  was motivated by the economy’s failure to grow as quickly as the Fed had forecast. Members of the Federal Open Market Committee (FOMC), the Fed’s main policymaking body, now expect growth of between 1.9% and 2.4% this year, down sharply from their April forecast of growth between 2.4% and 2.9%.

Moody’s Investors Service on Thursday slashed the credit ratings of 15 large financial firms. Citigroup and Bank of America, two United States banks that were hit hard in the financial crisis, are now rated only two notches above junk. While Morgan Stanley avoided a worst-case scenario of a three-notch downgrade, its rating slipped by two levels.

The downgrades are a serious blow for the banking industry, which is already dealing with the European sovereign debt crisis, a weak American economy and new regulations.

Moody’s downgrades are part of a broad effort to make its analysis more rigorous. The financial crisis stained the reputation of credit rating agencies. Both companies attached high ratings to mortgage-backed bonds that later suffered big losses in the housing bust.

Before the announcement on Thursday, bank shares continued to fall. Goldman Sachs, Citigroup, Bank of America and Morgan Stanley were all down for the day.